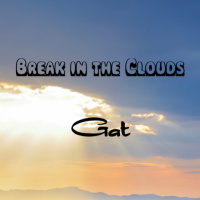 Break In The Clouds comprises twenty of the most popular songs by Gat across his entire career, both as a solo artist and also as a member of Starbyrd. Some have been re-recorded and remixed and all have been remastered.

Break In The Clouds has taken over three years to get to a point where it is now ready for release. The track listing can be seen on the 'Albums' page.

Graham was kind enough to send me an advance copy of the disc. Although prominent jangly guitar riffs are absent from the eleven tracks, this is a polished album that will appeal to mainstream power pop fans. GAT continues to have a knack for writing catchy, hook-laden songs. The opening track – “Gone For Ages” – could be mistaken for a Travelin’ Wilburys song. Overt Beatles references and more subtle ELO and Everly Brothers influences can be heard in Graham’s songs. As in the past, Graham’s vocals often remind me of George Harrison. When you combine these ingredients, the finished product is some very fine pop/rock from a very talented veteran singer/songwriter/musician. When you check out GAT’s back catalogue, you will discover that he collaborated with Horst-Peter Schmidt on the very first Starbyrd disc. Long may you run, Sir Graham!

Don't let the title of this disc, Eclecticity, and the name of the artist, Gat, fool you. Granted, a variety of musical styles and recording methods are featured on these eleven tracks but fans of Graham Allman-Talbot will have no trouble recognizing elements that are common to Graham's music - Rickenbacker 12-string chiming riffs aplenty, and a reverence for Roger McGuinn's and the Byrds' body of work. The disc includes an outstanding version of the Chris Hillman-penned "Have You Seen Her Face" and the Roger and Camilla McGuinn Irish-inspired folk-rock ballad "May The Road Rise To Meet You." In fact, it shouldn't surprise listeners to hear a combination of Graham's layers-of-guitars solo material as Gat and his jingle-jangle collaborative efforts with Starbyrd (there is a reference to Starbyrd in the lyrics of "I'm Home") on this disc.

Classic Beatles influences are also present in Graham's music, and his vocals often remind me a bit of George Harrison. The excellent stripped down version of "After The Gold Rush" is indicative of the impact that Neil Young has had on Graham's music. Last but not least, Graham pays homage to Arthur Lee by reprising lyrics that Arthur used on Love's "the Red Telephone" in the album-ending opus "You're Everywhere."

If you are a fan of the aforementioned artists, you will really dig this album. If you are addicted to jangly, Byrds-derivative music, you will love this album. Graham Allman Talbot is a 21st century ambassador of the folk-rock music that originated in the mid-1960s, and Eclecticity is the latest testament to his exceptional ambassadorial skills. Just as the lyrics to "I'm Home" suggest, you too will be right at home with Graham's timeless melodies, songs and harmonies.

"The 12-string electric guitar may never recover! For someone wanting to have a prime sample of early Byrds, heavy on the trademark Rickenbacker 12 string fingerpicking sound, then start right here!"

"This cd delivers heavy on the 12 string Rickenbacker guitars which means the Byrds sound rules on this one. Along with that is the sound of the Beatles! So if you dig the sounds of the two most awesome "B" bands in the world, just get this! Gat is a truely excellent jangle pop delight! "

"This is a solo album of all kind of songs sitting around for Byrds inspired band Starbyrds member, Gat. The home-brewed jangle is all over the place on these 16 songs, which have not only the sounds of The Byrds firmly embedded in them (think Gene Clark-era) but also George Harrison and some of the jangle of classic REM. There's some very fine covers in here, as well - "If Not For You", "Isn't It A Pity", and "My Back Pages". Acoustically driven at its base, jangle fans need to check this one out and let it hit ya hard! Recommended!"